I would never have guessed there were nearly 40 choices unless I wrote the Best Shark Squishmallows Guide. And here I was, believing I’m the Squishmallows expert. I write about and collect them, and my kids collect as many as I do. You can call us a family of Squishmallow snobs because we love squishy plush toys.

I got lost in the options, and it gives me great pleasure to neaten the ocean before you dive into seeking the Shark Squishmallow of your or your children’s dreams. With only 10 Shark members, I’m happy to announce that you’ll find some unique sea life Squishmallows. Let me show you the fantastic squishy sharks available.

One thing I promise is that you won’t be overwhelmed by my best picks among the 38 Shark Squishmallow variants. I’ll peek at the available variants for all ten sharks, but I’ll only cut down the best selections to unique choices. I want you to walk away with the best Shark Squishmallow for a deserving fan.

I’ll show you how to turn the ten characters’ personalities into the best buys for little ones. Then, I’ll share a variety of unusual Shark Squishmallow picks to bring smiles to any fan. Furthermore, I’ll share how I liked the top 17 sharks from the 38 variants, including at least one of each squad member.

Are you ready to glance at my best picks before welcoming the sharks?

My Top Shark Squishmallows at a Glance

Squishmallows welcomed the sharks to the sea life squad, and there were new faces bringing joy to children and fans everywhere. There are a few different types of Squishmallows, and the shark squad introduces many variants. Let’s take Gordon the Gray Shark Squishmallow as an example.

Gordon is a lovable shark with an adorable smile and personality. He comes in various sizes, including 7.5, 12, and 16-inch squishy plush. Gordon shows his gorgeous smile in the size variants, and the 12-inch Squishmallow has black trimmings on the fins. The gray shark then has a 12 and 16-inch variant with a closed mouth.

Most fans don’t notice the differences between the standard Gordon variants. However, the famous shark then comes in a variety of unique versions. It begins with a 2-inch Gordon Shark Squishville. Gordon also comes as a reversible Flip-A-Mallow and a 5-inch, an 11-inch, and a 12-inch tie-dye shark.

Gordon isn’t the only member with unique types.

Unusual variants I found for Shark Squishmallows include:

There aren’t many Squishmallow squads with so many variants, but unique sharks fall into multiple teams.

With 38 versions of Shark Squishmallows, you’ll need to know the ten base friends. Pick the shark friend that best suits your or your children’s personality by learning the squad. Let me share a quick rundown of each shark’s personality and versions so you can match their personalities.

Chandler has three variants: a standard 8-inch Squishmallow, slippers, and a baby version. He loves napping, snacking, and sharing with friends. He’d suit kids with the same hobbies.

I won’t tell you again that Gordon has 14 variants. I’ll instead tell you that Gordon is the friendliest shark around. He’s a helpful and determined little guy who wants to start a non-profit organization.

Luther has four variants: an 8-inch, 12-inch, and 16-inch tie-dye Squishmallow. He also has a backpack. Luther is determined to use his scientific mind to discover why he sneezes so much.

Rey, the Shark Squishmallow, has seven variants: a Flip-A-Mallow, two regular editions, an inspirational Squishmallow, a micromallow, a Squishmallow with an item, and a stackable version. Rey loves fashion and comes across as a shy romantic. He usually appears as a Valentine’s Edition.

Rocket Hammerhead Shark Squishmallow only has an 8-inch standard plush. He’s a Walmart exclusive who loves swimming as sharks do. He’s a water baby.

Samir, the Blue Whale Shark Squishmallow, has two variants: a backpack clip and a standard 14″ plush. Samir is a kind and compassionate friend who often leads the squad.

Santos, the Shark Squishmallow, has two variants: a HUG MEES and a Hugmallow. He’s a calm character with ambition, and he’ll get the shark of his dreams.

Selene, the Shark Squishmallow, is a Valentine’s exclusive. She’s a pretty pink shark with massive dreams about becoming a biologist and linguist. Selene is smart but lovable. She had other variants now discontinued.

Tank, the Hammerhead Shark Squishmallow, has two variants: an 8-inch and 12-inch standard plush. Can you imagine a hippie shark? Tank fills the gap between relaxed and loving peace.

Underwater Squishmallows include many sharks, and they’re all friendlier than they are in the wild. With so many, you need guidelines for buying the best sharks around. Here are my buying tips:

Shark Squishmallows was the most significant challenge to sort into the best ones. They have more unusual variants than any other squad. However, I’m happy to share my best picks and why they made the winning spot. I’ll share the squads, versions, sizes, and whether they’re original. You only want authentic Squishmallows.

The ridiculous Baby Shark song comes to mind when I see baby Squishmallows. My kids are frantically obsessed with it. I’m sure you’re as sick of the song as I am. Anyway, baby Squishmallows are adorable beyond belief. The Yellow Baby Shark Squishmallow Chandler is a winner for cuteness, cuddliness, and squishiness.

Crossover Squishmallows include unicorns mashed into cats and llamas. I love the blue whale and shark combination because they’re both sea creatures. The blue whale is also one of my favorite sea creatures because it’s majestic and ancient. Samir, the Blue Whale Shark Squishmallow, is the ideal blend.

Hammerhead sharks are incredible creatures. I don’t know how they move swiftly through the waters with their oddly-shaped heads. However, Rocket got his name from his fast swimming. Rocket, the Hammerhead Shark Squishmallow, is a Walmart exclusive with a gorgeous design. He’s also blue to shake the colors up a bit. 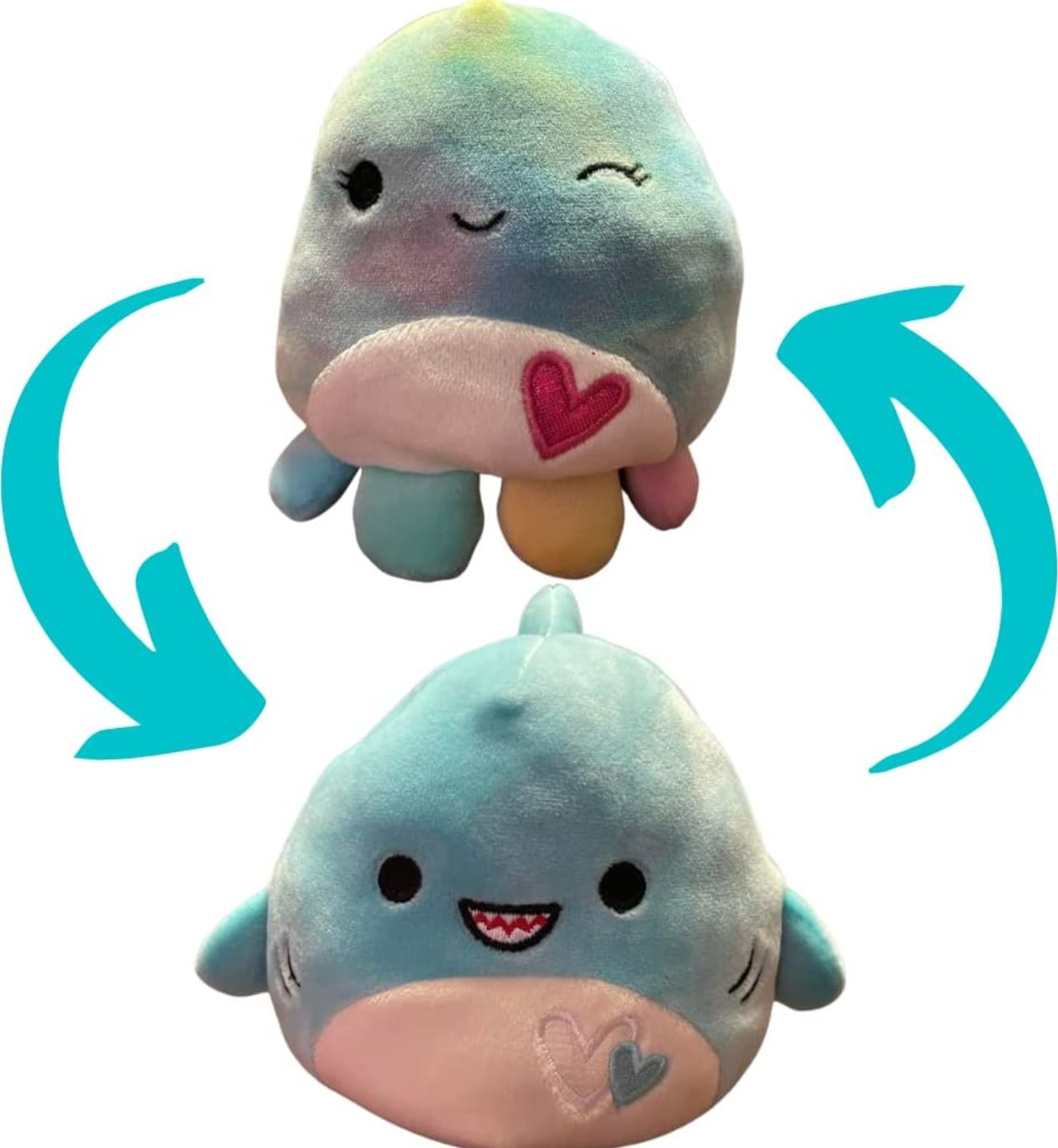 I’m struggling to find the right words to describe how fabulously soft a Hugmallow feels. Additionally, Santos, the Shark Hugmallow, is a treat because he looks like a Great White Shark. He comes in full detail and makes an excellent pillow buddy Squishmallow. He’s massive enough to use as a pillow, too.

Shark HUG MEES are as cuddly as Hugmallows, and they make the perfect pillow buddies for kids and older fans. SANTOS, the HUG MEES Squishmallow, only comes in the two unique variants. He makes the best type of squishy friend from the shark squad. HUG MEES also come in fabulous sizes to improve cuddliness.

Sharon, the Shark Squishmallow, has a message for her fans. She wants to wish her party friends a happy birthday. Sharon likes being the party’s life, and she undoubtedly makes everyone know she has arrived. I can imagine how this Shark Squishmallow will become a favorite for birthday parties.

My daughter loves Squishmallow backpacks, even though I only recently learned about them. She saw kids at school with the marshmallow-feel bags and wanted one. Luther, the Shark Squishmallow Backpack, is unusual for two reasons. He’s also a tie-dye beauty that brings color to a child’s world.

Imagine the conversations about the two sharks among your child’s friends. Luther has a companion Squishmallow children can enjoy carrying around. Samir, the Shark Squishmallow Backpack Clip, is an excellent choice for giving your child two best friends they always have by their sides.

The only pick I didn’t find challenging was this one. Selene, the Shark Squishmallow has a positive message for everyone. She says life’s fin-tastic. She’s also cute as a pie to fit into Valentine’s squad, and she has more life in her eyes than any other Shark Squishmallow. Her eyes look like they have depth and stories.

Micromallows are the littlest squishy plush you can buy from the marshmallow brand. I had to pick Ray, the Shark Squishmallow, as the winning set because he comes with a surprise micromallow. Rey also shows his favorite Valentine’s design, and he can act as a big brother to whoever comes out of the surprise pack.

The Shark Squishmallows have a few versions with items, and it was challenging to pick the best one. I chose Gordon, the Shark Squishmallow with Goggles, because I see the irony of the plush. Sharks don’t need swimming goggles, making this a funny combo. Gordon is also one of the most famous sharks.

Shark Squishvilles are as adorable as micromallows. The difference is that you undoubtedly get a shark when you order one. Gordon is so famous that he also comes as a Squishville member. The plush is only two inches tall, so you can’t deny how cute it looks. Gordon Squishville is a welcomed addition to my best picks.

Stackable Shark Squishmallows are tons of fun for kids. The shark squad also has a few of them, whereas other teams only introduce one or two. Once again, Gordon debuts in this variant. You’re starting to see how famous the little gray shark is as a Squishmallow. Gordon, the Shark Stackable Squishmallow, wins a child’s heart.

Tank, the Hammerhead Shark Squishmallow, is the only standard member I picked because the poor little guy wouldn’t make a list unless his regular version appears. Tank is a beautiful hammerhead shark again. However, he has the natural coloration you see in the ocean. Maybe we’ll see more of Tank in the coming months.

Many Squishmallows come in the tie-dye squad because the colors are hypnotic and beautiful. Luther, the Tie-Dye Shark Squishmallow, undoubtedly gets my attention with his bright circles and centeredness. He also has more prominent fins for a sizable Squishmallow. Be careful of hypnotizing yourself with his gorgeous colors.

Admittedly, I’d never seen Squishmallow slippers until yesterday. I must own a pair, and I’m sure my kids will be asking for them as soon as they see this picture. Feeling Squishmallows between your fingers is one thing, but wearing them like clouds on your feet is entirely next-level. Chandler, the Shark Squishmallow Slippers, wins.

Question: Which Shark Squishmallow is the Most Popular?

Answer: It’s a matter of supply and demand. I get the most popular Shark Squishmallow from looking at how many variants each one has. The Sharks, Rey, and Luther have a few variants and appear famous. However, Gordon the Gray Shark Squishmallow has 14 different versions and sizes, ranging from two to 16 inches.

Question: What Types of Shark Squishmallows Can I Find?

Answer: Squishmallows have a range of versions, some fitting into multiple squads and others offering unique features like inspirational messages. I found the regular, backpack, clip-on, crossover, HUG MEES, Hugmallows, marshmallow slippers, micromallows, Squishvilles, and Flip-A-Mallow sharks. There’s one for every child.

Question: Which Shark Squishmallow is the Most Unusual?