Some people like cute games where they customize things and make friends with little animals. Some people like battle games with horror elements to keep their attention and test their combat skills. For those who like both, there is Cult of the Lamb, a combination of rogue-like and resource management. You can build your very own cult by battling those who oppose you and recruiting new followers in five warped, demonic regions.

After release, Cult of the Lamb quickly gained a huge following. There’s a huge wave in pop culture now of making horrifying and dark things into cute versions of themselves. So taking the horror of Eldritch cults and playing them out with cute animals fits right in.

In my opinion, the best kind of merchandise to represent this adorable horror is plushies. So I’m glad they quickly rolled out amazing plushies to go with their game. 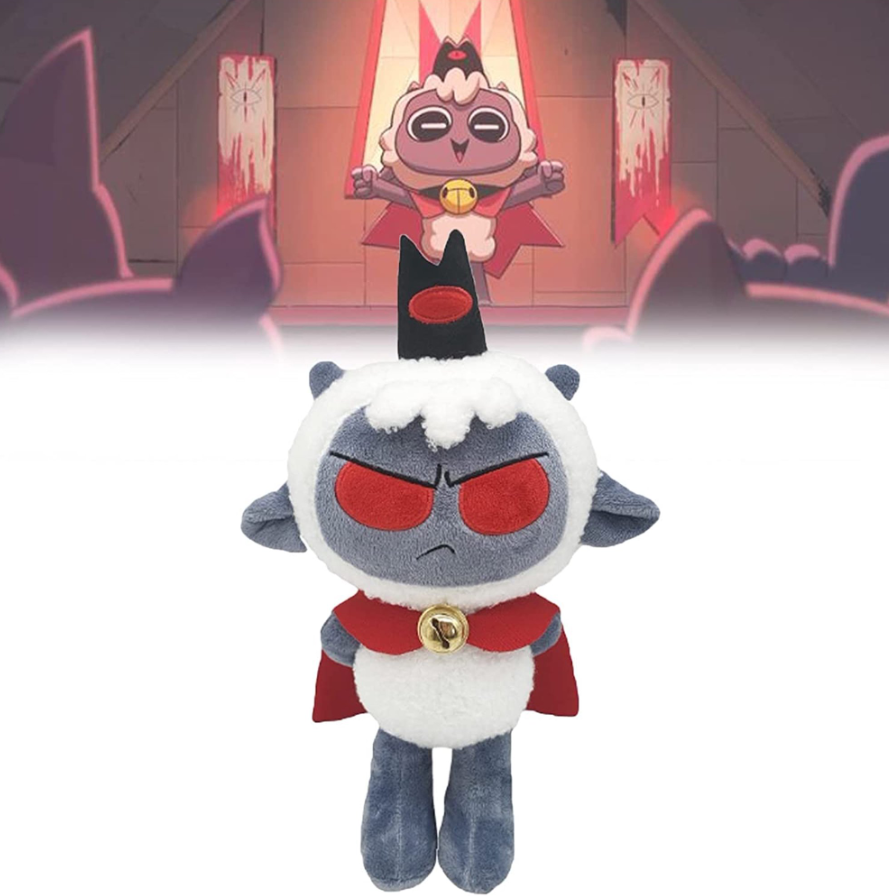 The Cult of the Plushies

Since the game is fairly new, there aren’t a ton of Cult of the Lamb plushies available. Currently, there are four to choose from that aren’t fanmade. One is made and sold by Devolver Digital, the game’s publisher. The other three depict one of the lamb’s expressions and are made by a third party.

Of the two styles, Devolver, by far, makes the better plush. The other three aren’t bad. They are very cute, but the quality and thought put into the official plush blows my mind. It replicates the style of the game perfectly, or as perfect as it can be, moving from 2D to 3D. The proportions are exactly the same, and the fabric mimics the texture flawlessly. They even used a real ringing bell!

I hope they eventually make more Cult of the Lamb plushies. I’d love to see a whole collection with the lamb at the center, surrounded by their followers. Maybe even the other cult leaders if Devolver’s merchandise team is up for a challenge. 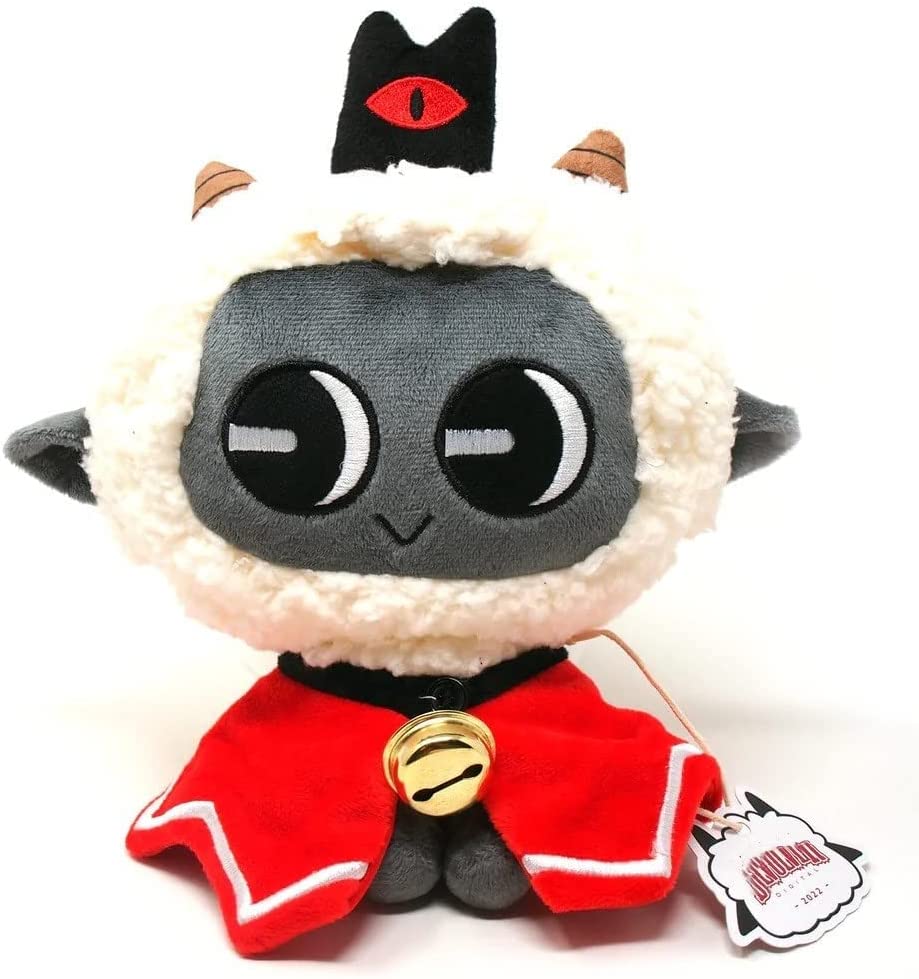 When initially released, this plush came with a Steam DLC, allowing you to add the plush to the game. Sadly, that promotion has ended, and that batch has sold out. The plush itself, though, is still available for purchase elsewhere.

The pattern of the plush makes it emulate the style of the game so well; it’s one of the most accurate game plushies I’ve ever seen. The head is a rounded rectangle of fluffy white fleece with a square patch of grey for the face. Two tiny grey ears poke out on either side. On the top of the head is a tiny bit of extra fluff above the face, two little brown horns, and a demonic crown.

The crown is a flat shape, and while this usually bothers me, it works well since the game’s style is a dynamic 2D one. A large red eye sits in the center of the crown, below two prongs. This is the source of the lamb’s power, given to them by The One Who Waits.

I love the embroidered face. There are two wide eyes with rectangular pupils, mimicking a goat’s. The mouth below has a cheeky grin. The expression gives off the sense that the lamb knows something you don’t, which it probably does.

The body is extremely small and is nearly encompassed by a red cloak. Like in the game, you can only see the lamb’s hooves poking from beneath the zig-zag hem. Then hanging from the collar is my favorite detail, the bell. It’s a genuine ringing bell, the wonderful cherry on top of this amazing plush. 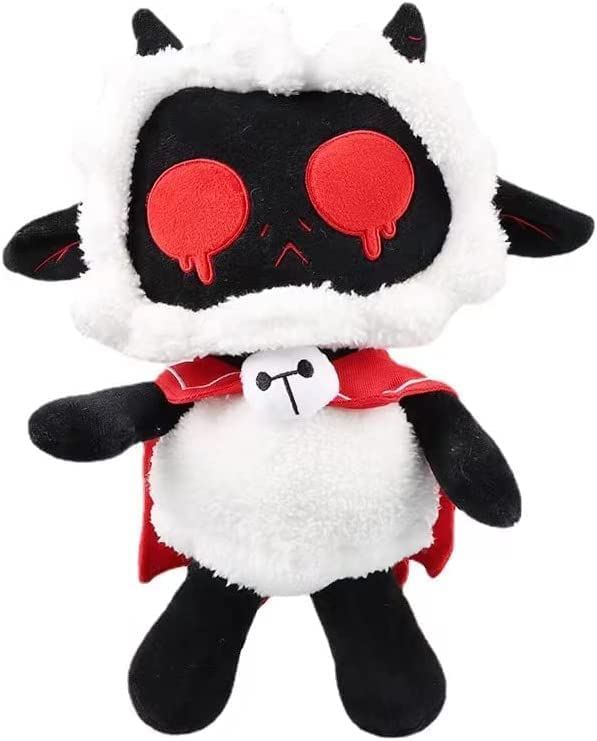 This plush resembles the lamb when they are using their power for rituals. When performing some rituals in-game, the lamb levitates, their eyes turn red, and they begin to cry blood. The look is imitated here by making the eyes circular with two drips at the bottom. I love how vibrant the color is against the black because it makes it look like they’re glowing.

The proportions of this lamb, and the next two that match, are much more even than Devolver’s. The body is fairly large, with longer limbs, so it doesn’t match the game’s art style. The cloak is also much smaller, acting more like a cape since it only covers the lamb’s back.

Of all the plushies, this one has the darkest fur, which, to me, makes it look the most demonic. Especially when it contrasts with so much red. Combine the colors with the expression, and you’ve got the scariest-looking lamb. I recommend this one to anyone who is a big fan of the scarier elements of the game. 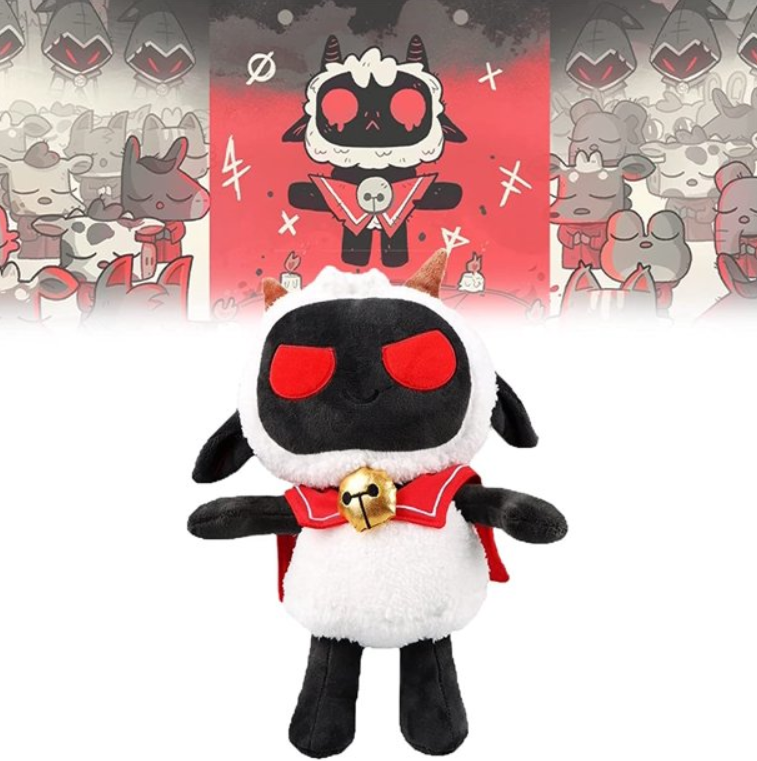 This version of the lamb depicts what happens when you decide to run your cult to empower yourself. The angry eyes and confident smile make it seem like the lamb holds all the power, and they know it.

Mostly, this plush is constructed in the same way as the crying plush, with the same proportions and fabric. However, the textures and colors vary a bit. Here, instead of pure black, the lamb’s fur is a dark grey, and the horns are regular light brown.

The bell is also the normal golden color rather than silver. Texture-wise, the fleece could be more fluffy. This results in the overall look of the plush being neater but not as soft. I recommend this to players who like to take power over their followers. Some cult leaders want to help their followers, and others want to use them as tools. This plush fits perfectly into the latter category. 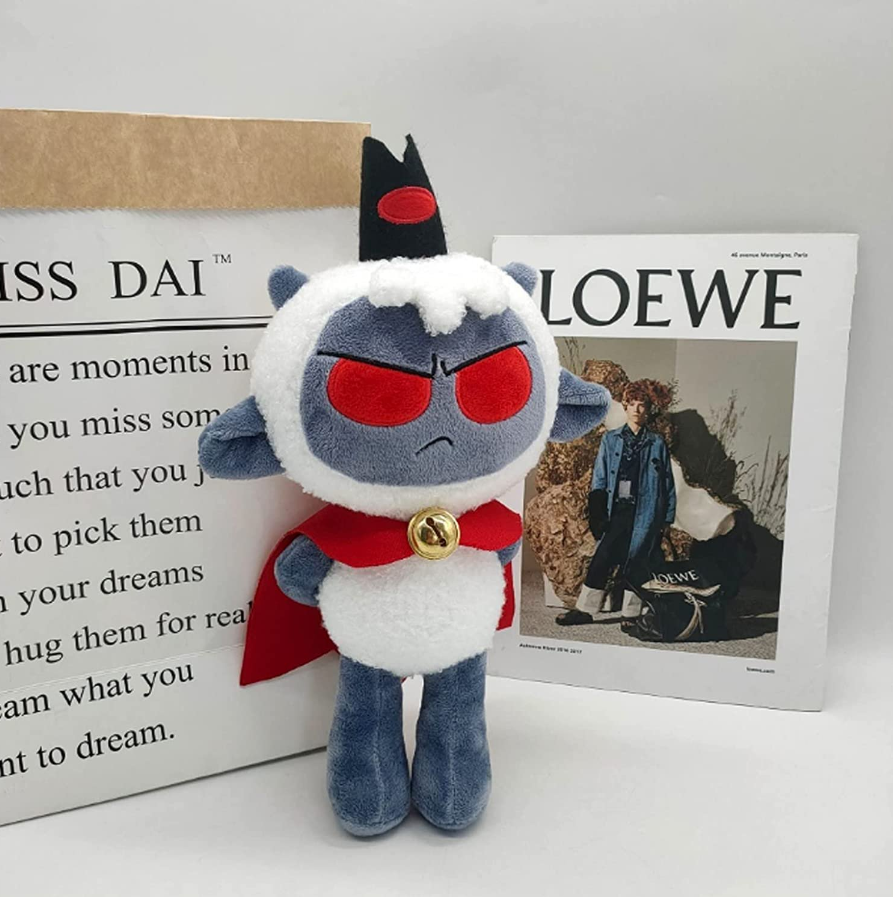 This lamb is the hardest to find of the set of three. It has a similar energy to the powerful lamb but with an angrier twist. It still has angry eyes, but now they are asymmetrical, and the confident smile has been replaced with a stern frown.

The pose is also changed. All the others are typical plushes not doing a specific pose. Then you get to this one with the arms firmly folded behind the back. When looking at it, I get the impression of a commander looking out over their followers with disappointment.

The fur of this plush is the lightest grey, making it easier to see the black eyebrows and mouth. For some reason, they choose to make this plush’s horns the same color as the fur. The horns are usually brown and occasionally black, but I’ve never seen them grey, so I don’t understand this choice.

This plush would fit best with players who aren’t just craving power but are looking to be cruel. They want to turn the lamb into a villain and take power from The One Who Waits. The clear anger in the expression is perfect for the people who want that heavy contrast of a cute-looking character who turns out to have a dark side.

Other Cult of the Lamb Merch 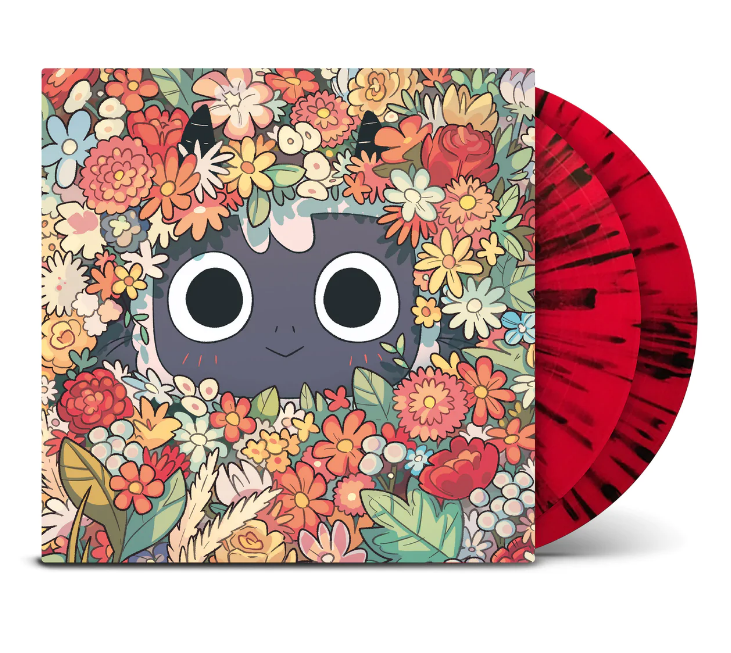 Most of the merchandise Devolver has made for Cult of the Lamb is already sold out. The only thing left is this vinyl record, perfect for the vintage music fan. The record features 42 tracks from the game and gorgeous cover art that showcases both sides of the lamb.

Cult of the Lamb’s music is simply incredible and flawlessly changes between the relaxing tunes of the home base and the amped-up beats of the dungeons. Having these records is a great way to bring those vibes into your every day, or you could just set them up on a shelf to have something pretty to look at. 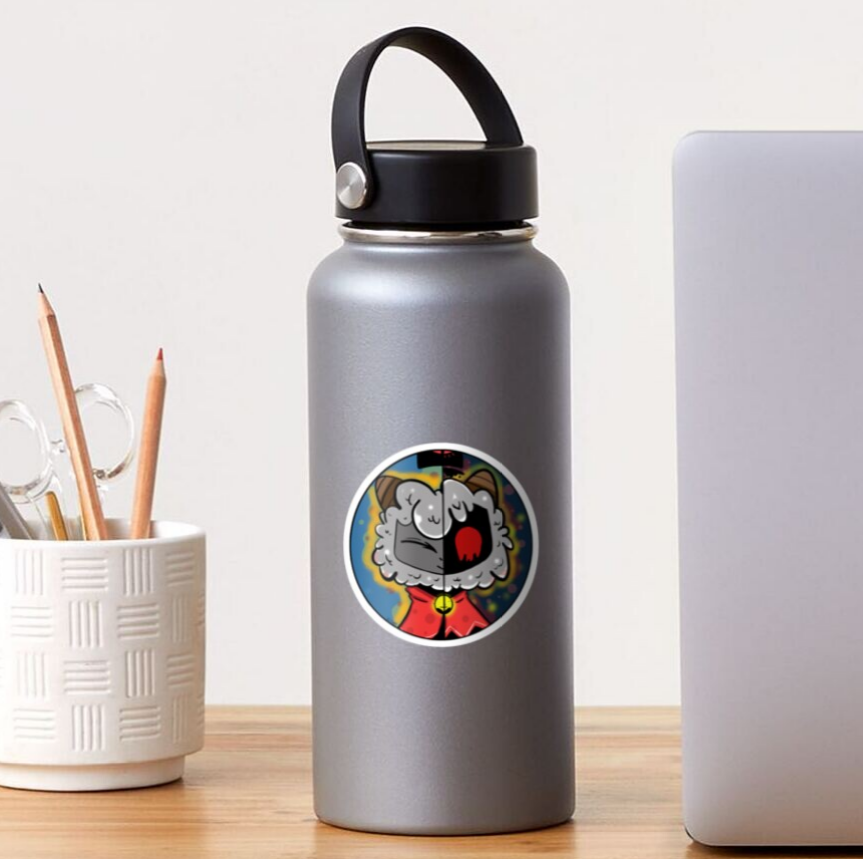 This design is available on Redbubble by creator SmiChaa and depicts the lamb split in two. One half stands, smiling in front of a light blue background with yellow sparkles. The other is surrounded by much darker colors and has the look of the ritual lamb with red, crying eyes. I love the colors and art style. The lamb’s fleece looks nice and fluffy, and the colorful background makes the lamb’s monochrome colors pop.

This design is available on several products: stickers, t-shirts, posters, and hats. Though, I think that the circular design really looks best on a sticker.

‘This is Fine’ Sticker 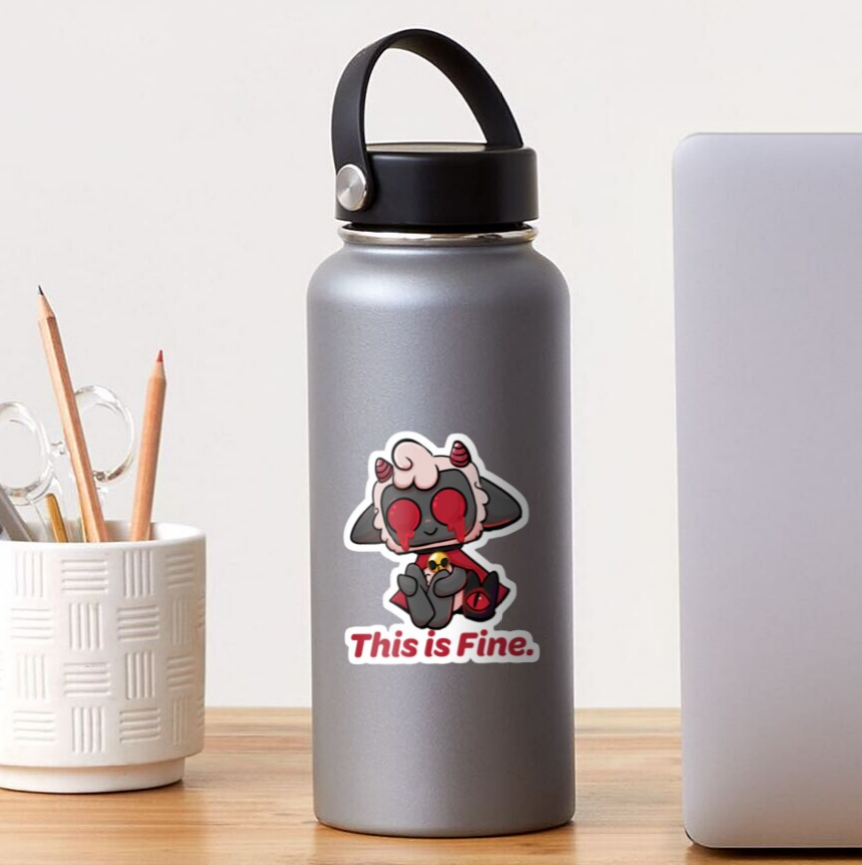 This design gives a bit of humor to the sad-looking ritual lamb. It shows the lamb with their bloody eyes, hugging their knees and looking down with a pained smile. Their crown sits at their side and looks up at them like a little friend. Underneath this are the words “This is Fine” in red font, referencing the meme of the dog sitting in a house fire.

I like this design for its humor and excellent expression. The huge crying eyes paired with the smile is adorable and painfully relatable. I’m always a fan of a character that looks like they’re having a rough time but are doing their best to get through it.

You can also get this design on a phone case or a t-shirt. The phone case works very well since the design is near the bottom and the large empty space only makes the expression funnier. On the other hand, the t-shirt doesn’t fit quite as well. It looks fine, but I’m not a fan of designs just sitting in the middle of a shirt without much consideration for the clothing.

‘I Want You for the Cult’ T-Shirt 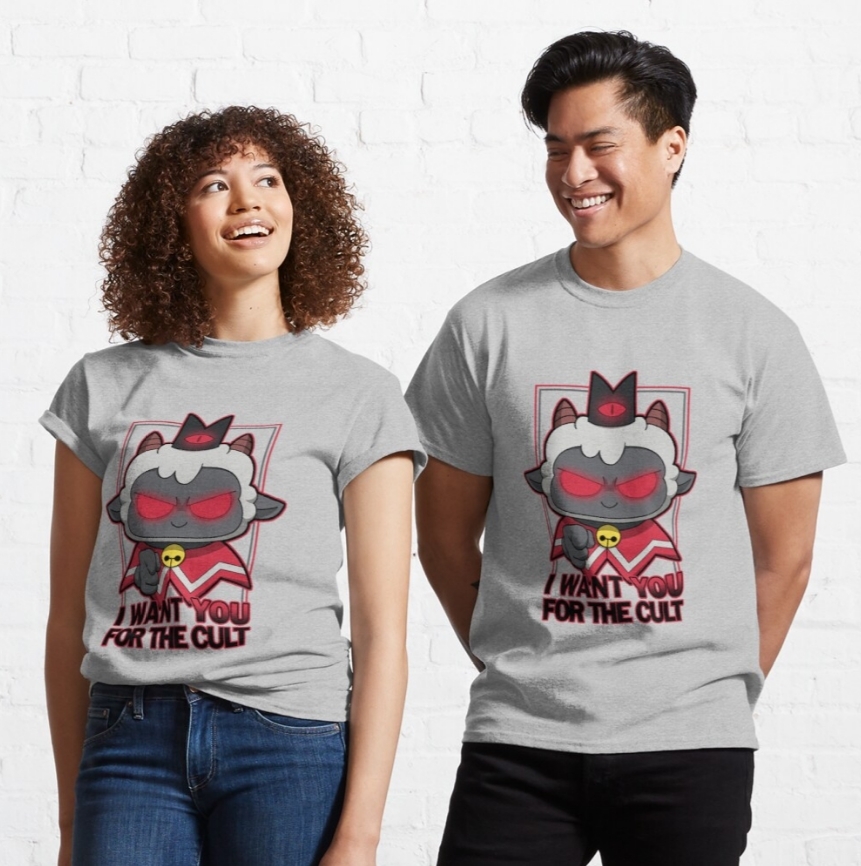 In an Uncle Sam-inspired design, the lamb points at you, saying they want you for their cult. The artwork is exceptionally clean, with distinctive lines and bright colors. I’m particularly impressed with the look of the hand, it couldn’t have been easy to get that angle.

Buying shirts on Redbubble is tricky. Often the design was made without consideration of how it would look on a shirt and is just a big picture placed right in the middle of the torso. This design works well, though. The taller shape takes up the right amount of space and prevents awkward placement.

Cult of the Lamb does an excellent job at combining elements of cute and creepy in both game and plush. The simple and cutesy style of the lamb is contrasted with their battle prowess and cult leader attire. You see this usually harmless creature and immediately know there’s something more, even if you aren’t familiar with the game.

While Devolver’s is my favorite, I appreciate how all the available plushies express their own version of the lamb. None of the plushies feel like it’s just some baseline depiction of the character made only to sell merch. Each one was thought through and designed with a specific idea. I really appreciate that and hope to see more in the future. 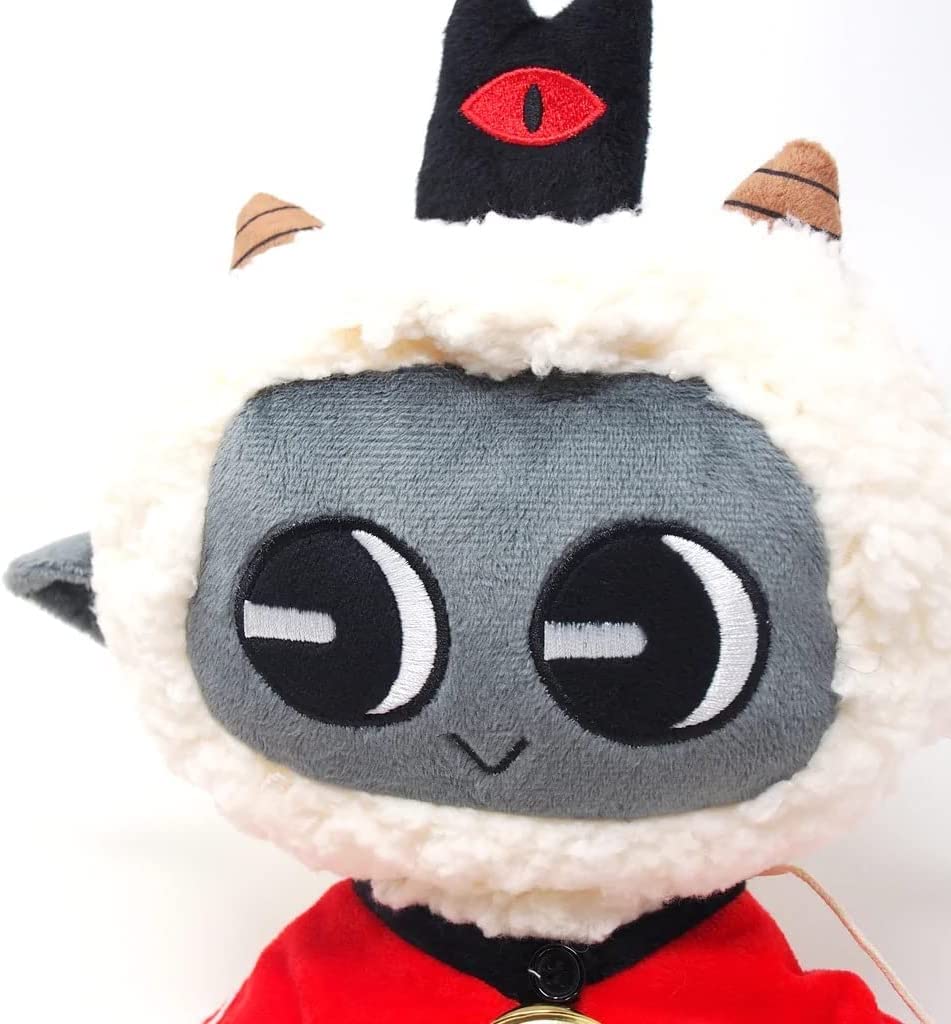 Cult of the Lamb Plush: FAQs

Question: What gender is the lamb in Cult of the Lamb?

Answer: The lamb’s gender is intentionally left ambiguous. This allows players of any gender to connect more personally with the lamb.

Question: Will Cult of the Lamb have DLC?

Question: What is the best fleece in Cult of the Lamb?

Answer: The golden fleece is the best. It increases damage by 10% per enemy killed but not without a price, as you lose a whole heart and your stacks if hit. So far, all the plushies are wearing the classic fleece of the lamb. 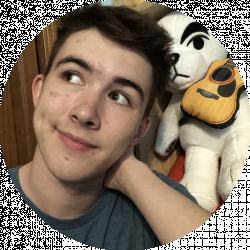 Mika Zans
Mika is a content writer who has a weakness for plush merch. She enjoys anything soft and cuddly. Her shelves and walls are filled with art and various knick-knacks from shows she likes, mostly animated or fantasy-based properties. She finds a personal connection with her favorites and shares them with you. When she's not writing, she enjoys playing Animal Crossing, Pokemon, and Stardew Valley.