Costco isn’t the first place on your mind when hunting for new Squishmallows. Admittedly, the giant wholesaler doesn’t focus much on variety. Hence, it’s good to know what’s rocking in my best Squishmallows at Costco guide, which includes buying tips on what you’ll find and how to maximize your Costco purchases.

So, stop thinking about the delicious roast chicken and learn more about Costco’s range of plush toys. Welcome to my complete guide to Costco’s best Squishmallows.

You won’t realize how many Squishmallows exist if you only type the name into the search bar. Indeed, Costco has more Squishmallows than you see on the website. Fortunately, my family is obsessed enough with Squishmallows to figure out how the store’s website works. So, let me share my valuable tips.

Costco is a wholesale store that stocks three main types of Squishmallows. However, you’ll have to dig deeper to find the many options of famous Squishmallows at Costco. For example, if you dig deeper, you can discover Olallah, the Pink Tie-Dye Owl. Don’t worry; I’m here to share how you find every Costco Squishmallow.

But first, let me share my favorite pick from the wholesale store. The Best Costco Animal Squad Squishmallow Multi-Pack is my first choice because it includes a unipig and a dragon, two creatures my children love.

So, it also falls into a fantasy squad. However, my favorite animal inside is Kelina, the Koala Squishmallow.

Besides, the pack also contains multiple yummy-looking Squishmallows. However, let’s learn about Costco’s Squishmallows before seeing my top six picks.

A Complete Guide to the Best Squishmallows at Costco

Costco’s delicious chicken and hot dogs aren’t the only product types you’ll find in the stores. In contrast, you’ll find many plushies, including Squishmallows.

So, let’s learn more about Costco and how they stock their shelves. Then, I’ll share tips about different Squishmallow squads and how I selected the best Costco options.

A Friendly Neighborhood Source of Squishmallows

Costco is a wholesale supermarket with brilliant products, ranging from mouth-watering roasted chicken to everyday household necessities. The stores are in over 800 locations, making Costco a daily supermarket for many avid shoppers. However, it’s also an excellent place to find items you don’t think about seeing.

Costco also stocks a variety of gorgeous Squishmallow plushies. They don’t have the widest variety because they focus on wholesale products and household items. As a result, what you find at Costco is more precious than buying a single Squishmallow on Amazon or other online marketplaces.

Another reason for Costco’s lack of variety is that they’re a sustainable company, meaning they carefully select what they sell. Fortunately, Costco knows the value of stocking up on Squishmallows.

Perhaps they know it all too well with their primary wholesale targets, which include the Squishmallows you find in the stores.

Costco typically sells three types of Squishmallows in online stores. It helps to know which Squishmallows you can find and how to maximize what’s available. Here are three Squishmallow types available at Costco stores: 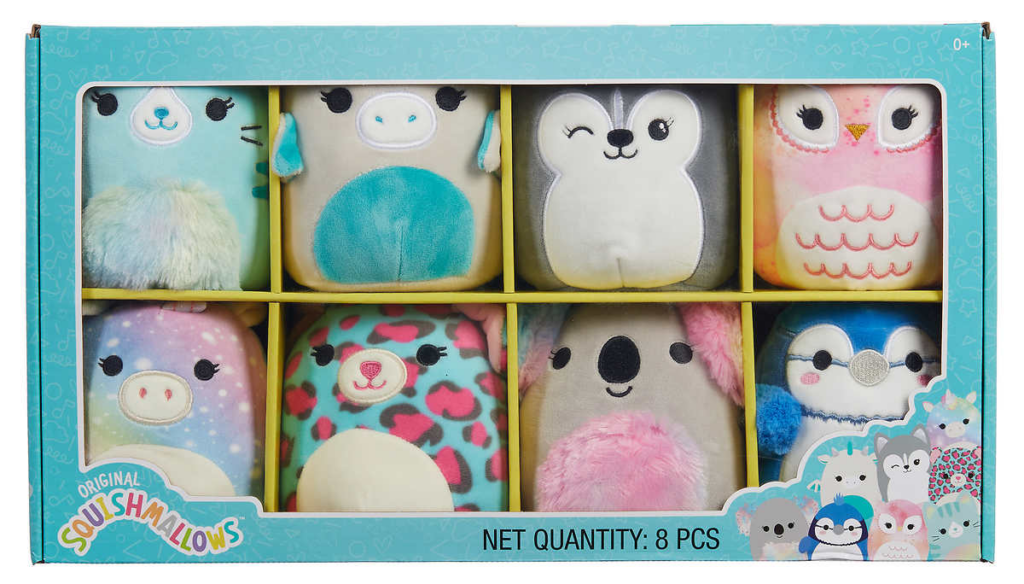 Costco loves focusing on wholesale and bulk purchases. So, they also enjoy selling Squishmallow multi-packs from various famous squads, some including:

In addition, Costco does various assorted squad Squishmallow multi-packs. Meanwhile, each box contains eight of the five-inch squad members or assorted buddies. They change their multi-pack Squishmallows occasionally. However, these Squishmallow packs are the best bang for your buck at Costco. 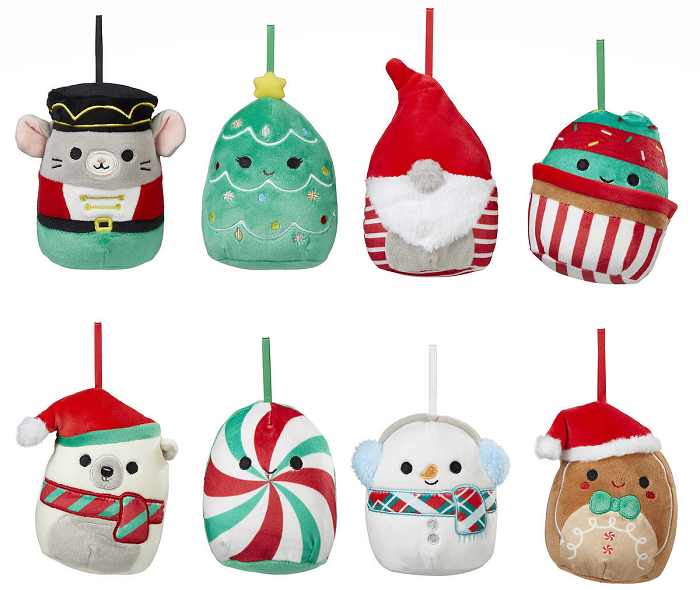 The miniature Squishmallow ornaments at Costco are four inches tall and come with a string to hang on a tree. The tinier eight-pack Squishmallow plushies at Costco are gorgeous, and you only have to buy one pack. However, you can choose between two groups: Winter and Classic. So, let’s see what the packs hide.

Winter Mini Squishmallow Ornament Plush Packs include some characters like:

Classic Mini Squishmallow Ornament Plush Packs include other members like:

A Quick Note About Squishmallow Ornaments at Costco:

Sadly, the ornaments are both Christmas-themed, limiting their use and collectibility. The four-inch Squishmallows at Costco don’t make much sense all year round. So, I won’t focus much on these cutie pies. 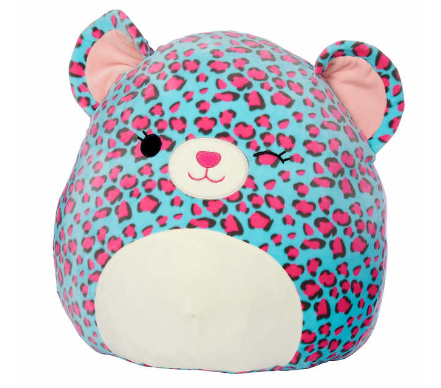 Wholesale Single Squishmallows require you to purchase a minimum of two 16 or 20-inch Squishmallows of your choosing. Remember that Costco focuses on wholesale purchases, which explains why they have a minimum sale rule. Still, you’ll find many famous Squishmallows among the wholesale lots.

Some of the 16-inch Squishmallows include popular characters like:

Some of the 20-inch Squishmallows include famous characters like:

A Quick Note About Wholesale Squishmallows at Costco:

Unfortunately, the 20-inch Squishmallows aren’t available before Christmas. However, add Costco to your in-search-of (ISO) notifications on Squish Alert to know when the store restocks the jumbo squad members. In addition, it would help to add the specific Squishmallows you need to your ISO settings.

How I Picked the Best Costco Squishmallows

I picked the best Costco Squishmallows by removing the holiday-themed options and the wholesale plushies that aren’t always available.

So instead, I’ll focus on the best Costco Squishmallow multi-packs with eight gorgeous plushies inside. I’ll include my favorite choice for each squad, including the assorted packs.

The animal squad Squishmallow pack at Costco is my favorite because it contains numerous famed creatures. In addition, I’ve been in love with koala bear Squishmallows since finding out how much potential the squad has in the animal kingdom. Furthermore, the bluejay isn’t a bad addition, either. Bluejays are fantastic birds.

Costco’s assorted Squishmallow pack is a gorgeous collection that includes animal, cat, dog, food, and safari squads. In addition, it should be a favorite for me because I’m South African. We engage with lions and elephants often. However, they don’t walk the streets, or not often. Let’s leave those myths alone for now. 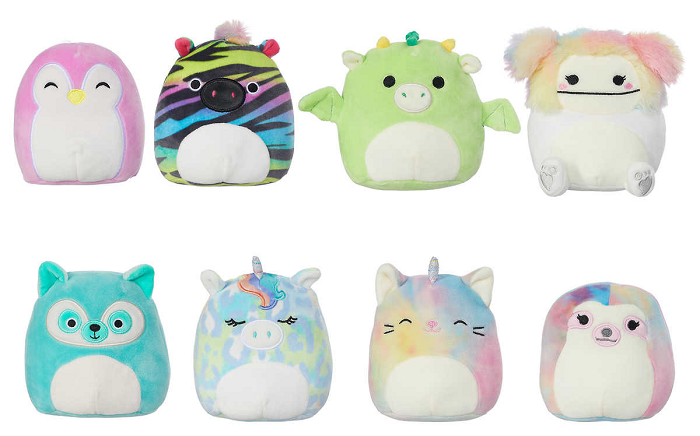 The fantasy squad is the epicenter of what my son and daughter love about Squishmallows. They enjoy the rainbow and tie-dye colors on regular animals while they get unicorns and dragons to add to the collection.

In addition, this fantasy squad Squishmallow pack from Costco adds many cute animals with bright colors. 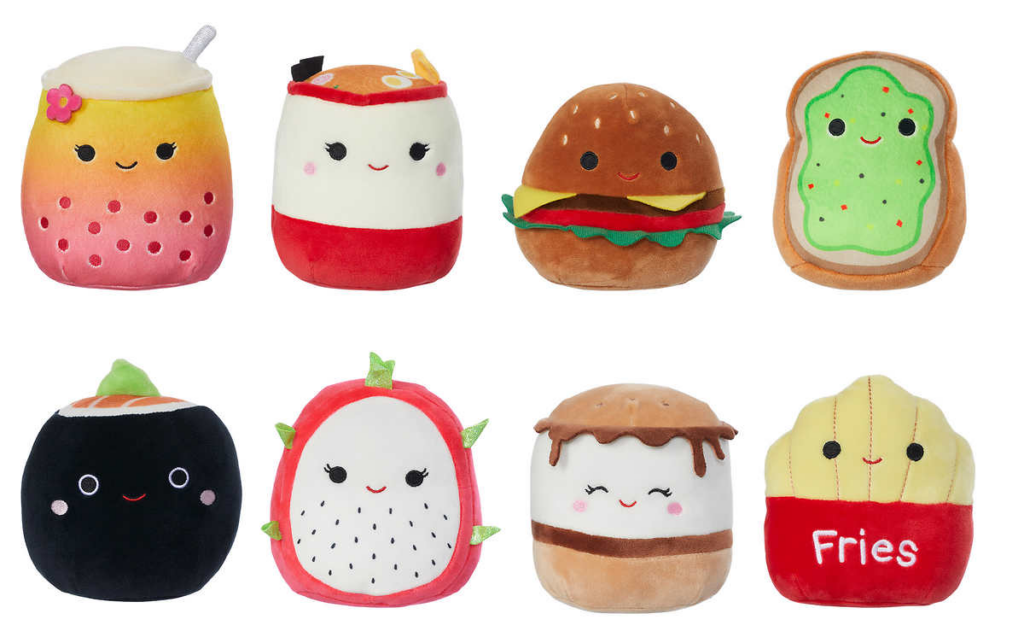 Costco’s food squad Squishmallow pack is tremendous fun for plush collectors because it looks edible. Bergit Squishmallow is likely the most famous in the box.

However, Carmelita, Carl, and Floyd look deliciously cute. Meanwhile, the Delita Squishmallow represents a mouth-watering fruit. So, please try it if you haven’t already. 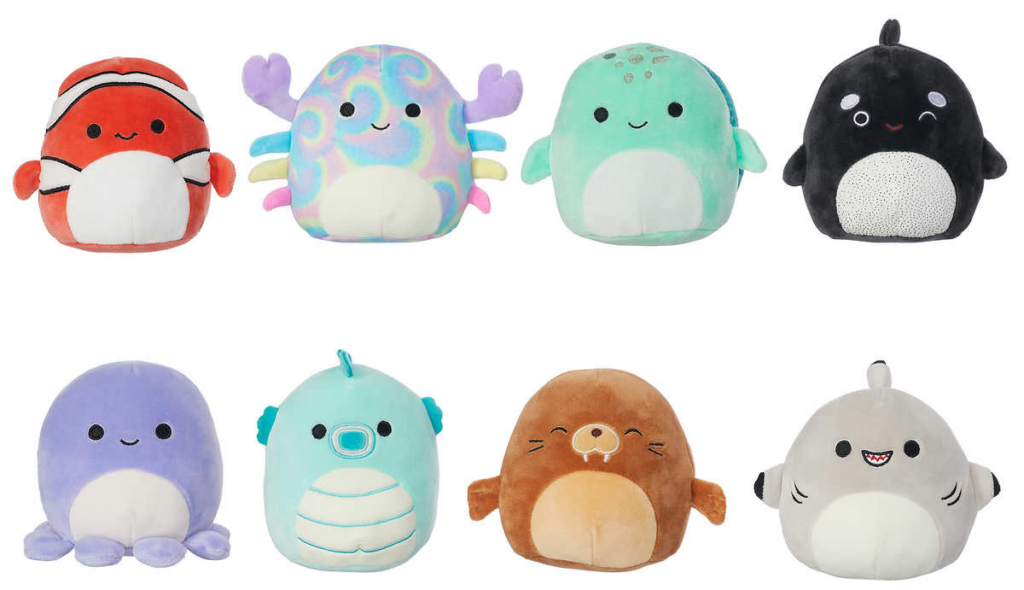 Costco’s best sealife squad Squishmallow pack includes a bunch of friendly, famous creatures from the deep. We love whale-watching on holidays, and orcas are beautiful animals. Meanwhile, we once owned a turtle as a pet. So, this sealife Squishmallow squad pack appeals directly to my family in memory of good times. 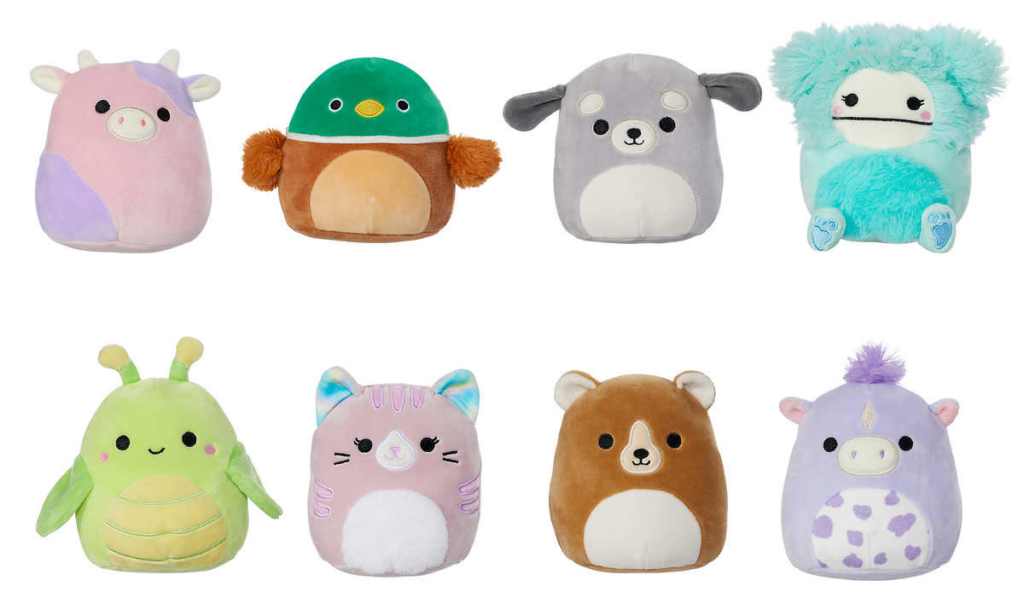 Costco’s wildlife squad Squishmallow pack includes some odd animals and bugs. For example, Brian and Laura fit the dog and cat squads. Meadow and Patty belong to the farm squad, and Pilar should be among the bug squad members. However, this pack somehow puts them all under wildlife.

Question: Why Does Costco Sell So Few Squishmallows?

Answer: In contrast, Costco sells many different Squishmallow once you know that each size has various options. For example, the 16-inch Costco Squishmallows includes 13 options.
You can pick Olallah Owl Squishmallow, Maui Pineapple Squishmallow, or Ben Dinosaur Squishmallow, among other favorites.

Question: What Is the Famous Costco Squishmallow Deal?

Costco isn’t the first place you think about when buying new Squishmallows, but it should be. Costco’s multi-pack approach allows you to purchase various five-inch Squishmallows for under $30. Every Costco Squishmallow multi-pack has something gorgeous for each fan like my kids enjoy dragons and unicorns.

However, my ultimate pick remains the Best Costco Animal Squad Squishmallow Multi-Pack because it also has a koala bear Squishmallow. So, I recommend buying the animal squad multi-pack from Costco first. Check out my koala Squishmallows guide to see Kelina Squishmallow’s true potential.

You won’t be sorry, and your kids will have eight magnificent animal Squishmallows to enjoy.